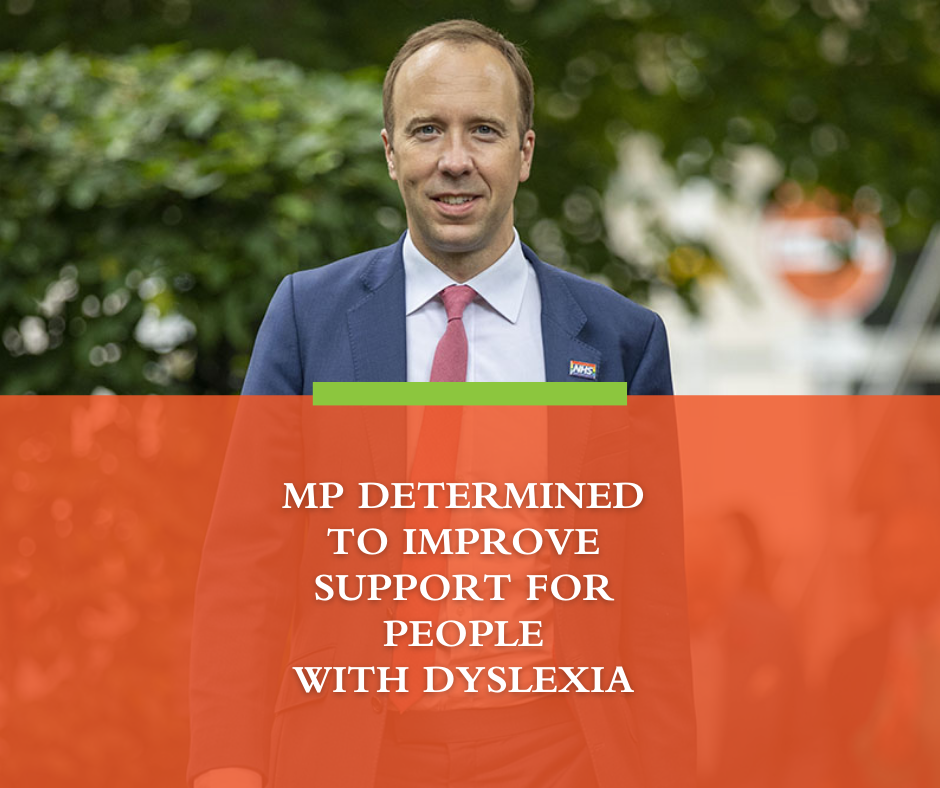 Matt Hancock has addressed the Dyslexia Show and re-iterated the ‘quiet social scandal’ of 80% of dyslexic children still going through the education system without being identified or supported. This was the finding made by the British Dyslexia Association in 2019. He wants employers to stop ditching CVs that have typos since this notion is out of date, as he continues to raise awareness of dyslexia.

He hopes to bring a bill into parliament and get it passed which will mandate universal screening for dyslexia in schools together with improved training. This would be greatly welcomed and could be said to be overdue.

At QS Dyslexia Tests part of Pico Education, we’ve been supporting this notion for many years. One can only conjecture that it has been the economic implication and lack of specialist training that have prevented this from happening up until now. We have seen among the institutions that use our screening products that those who are highly committed to supporting adults with dyslexia (often because there is a member of staff who has a personal interest either through themselves or family members being dyslexic) have provided all their new intake with the basic screener – Quickscan, ensuring that nobody with dyslexia went without support – to some others who have voiced a reluctance to carry out screening because of the concern of how they would cope if too many were identified.

The adult dyslexia situation could gradually begin to be alleviated if this bill goes through and children are identified early on and given the support they need. Mr Hancock also alluded to the disproportionately large numbers of people who are dyslexic in the young offenders and prison system. These are the people who never got the recognition or support for their difficulties. He mentions that 57% of adult prisoners have literacy levels below those expected of an 11 year old. He also calls for literacy teaching to be done within prisons. Expertise is available – if the commitment and resources are also made available, take a look at Dyslexia Workplace Solutions Ltd for further information.

Once again this information has been available in the public domain for the last 20 years. QuickScan was used in a study of the incidence of dyslexia in a young offenders’ institution carried out by Jane Kirk and Gavin Reid, which identified a high incidence (50%) since replicated in other similar trials. It featured in a Channel 4 documentary as part of their 2001 Dyslexia Week series Dyslexic Criminals – Polmont Prison Documentary. An Examination of the Relationship between Dyslexia and Offending in Young People and the Implications for the Training System. Jane Kirk and Gavin Reid, University of Edinburgh, UK.

Also with the technology available today, the creativity that dyslexic adults can bring to the workplace needs to be brought forward since there are ways in which text can be made accessible and ideas translated into written English with corrected spelling. In describing his own education and earlier difficulties, Mr Hancock stated that he was able to go forward because he had a talent for maths. For all those with dyslexia, whilst finding support for the things they struggle with, it has always been the case that if they could recognise what their strengths are – that is the crucial area to concentrate on – as it will more likely lead to positive results.

Read the full article and how Matt Hancock is pushing for a new government strategy.

Please do get in touch if you have any questions – we’re happy to help. Take a look at our dyslexia tests, QuickScreen and QuickScan.